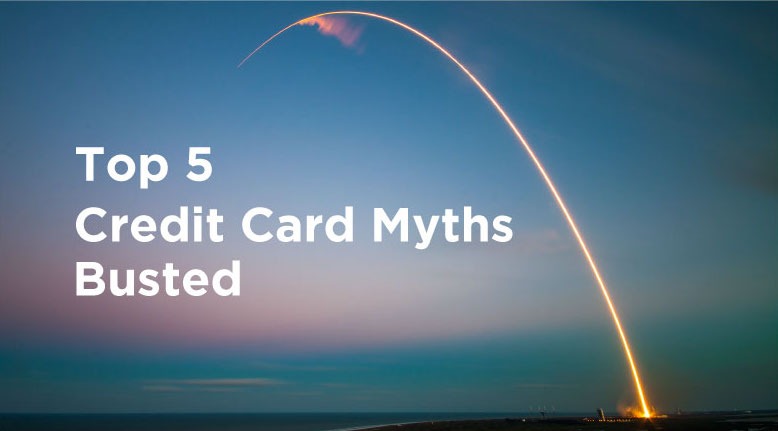 Almost everyone believes in things that aren’t true or real. Sometimes myths become so widespread that they are taken at face value. Similarly, when it comes to credit myths, people tend to trust them with their eyes closed. You should be careful as these myths you believe can really hurt your credit report and credit score in the long run.

There are myriad of credit myths out there, misleading many people, but there are a few that deserve special attention as they are the ones to watch out for. Here are the 5 credit myths that you must dethrone:

This myth has left its mark, especially on those who are anxious to pay off their debt. Even though, it is important to pay back a debt while trying to not get pushed back into this habit, but you should think carefully about closing your accounts. Closing a credit card can actually inflict more damage on your credit score. Based upon your credit operation, the decision of card closure could ruin the second-most vital part of your credit score. So, think twice before doing so.

Do you think that debt is debt? If your answer is yes, then you might want to rethink because that’s not the case. Some of the debts are considered “better” as compared to the others. For instance, a credit card with a large amount of debt is considered more negative than a modest mortgage debt on a house. In addition to this, some loans, like the ones you take from those payday loan places, are not viewed as “positive” as the ones you get from a well-known bank. Keep in mind that the debt type you owe matters, and it is taken into account in the credit scoring algorithm.

Just like the two above, this myth did its job perfectly by making people lean towards the wrong side of the road. Many believe that getting a better-paying job or a raise will help their credit score. This one is more pernicious than other credit myths out there. The truth is that your income isn’t attached to your credit score. Maybe your employer details are listed on your credit report, but it doesn’t actually make any impact on your score. The only way a higher income can be of any assistance to your credit score if you use put some of that extra earned money to pay down your debt, thus, decreasing your credit utilization.

Absolutely not! Just because you share accounts and you’re living together, engaged or married doesn’t mean that you have a common credit report. Each individual has his/her own credit report. In case you have a joint account, it will reflect on both of your credit reports and affect your scores, respectively (the report itself won’t be considered as a joint credit report). Apart from this, if you try to have a loan as a couple, lenders will view your individual reports only to determine the overall creditworthiness.

These credit myths have proven to be cumbersome for many, don’t allow yourself to be one of them. Get complete information about what really happens when it comes to credit score and report, and make your financial decisions in accordance with that reliable information.